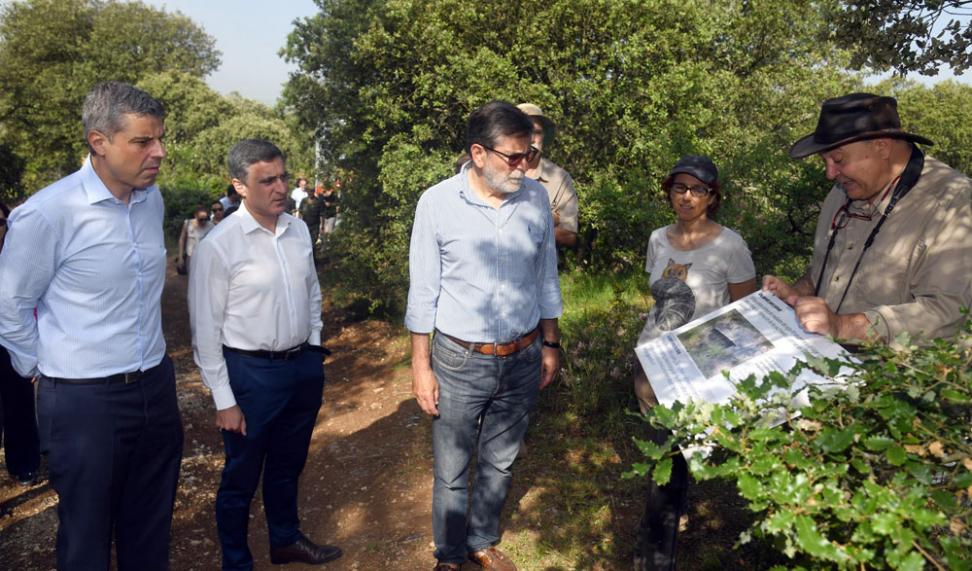 The clues are before our eyes. You just have to learn to observe to interpret them. This is the game that arises from the trails that surround the deposits of the Sierra de Atapuerca. Following these paths that Homo antecessor or Miguelón crossed a million years ago will allow us to make a composition of the place of what the Atapuerca Sites are and what they consist of and where those pieces that are exhibited in the Museum of Evolution come from. “This project, which started 25 years ago, aims to make this space a place that integrates the cultural, ecological and evolutionary sphere of the sierra,” explained the co-director of the excavations, Eudald Carbonell.

The route that complements the botanical trail on the flora and fauna of the mountains and the speleological visit to Cueva Peluda allows to have a space for reflection, three interpretive tables, five lecterns and beacons both for direction and explanations of some species of trees and plants of interest. A gooseberry tree that emerges between the cracks of a small quarry in the valley of the property will receive frequent visits to what has been called a Reflection Space. With a metal structure and space to sit, it will have a panel that helps to reflect on “where we come from, what our trajectory has been and think about where we are going.” It is one of the three tables and five lecterns that have been placed in what is already a 1,500-meter stretch. There is still another as much missing with viewpoints that give a perspective of the entire mountain range. The same that our ancestors could observe to look for food or to see dangers.

The objective is that this final part of the trail, which will return to the starting point, which is the access parking lot to the sites, is ready by 2020. One of the viewpoints will be located on the structure that is being placed in Cueva Fantasma. The other in the Cueva del Silo, which will be the continuity of this path that will end in the old quejigo that is already known worldwide because with him Mauricio Antón recreated the hominids buried in the Sima de los Huesos. “It will be a demonstration of social ecology probably unique in the world that will complete three kilometers of healthy route,” explained Eudald.

In the itinerary that is already open, it runs along the Las Rozas path. An old path of stonemasons that has been recorded since the 11th century and that still maintains its old structure. “We have hardly had to fix small areas, and a selective clearing,” says the head of the Environment Classroom of Caja de Burgos, Miguel Ángel Pinto. This area “communicated all known cave entrances and, on this layout, it will be indicated which site is below and how many meters so that the visitor can make a composition of the site of what the site complex is,” another coordinator pointed out. of the project, Ana Isabel Ortega. A way of approaching “that valley that we do not see but about which we have so much information about human occupation.”

Among the panels, the one referring to the Statues Gallery complex stands out, where last year a small Neanderthal phalanx was found, and whose entrance is very close to this path. You can also walk over the Lower Gallery, the Silo Gallery or the Choir Hall. These sites are accompanied by images of the interior as well as a legend with information about discoveries that have made them known. There is also a reference to an image made by Isidro Gil in 1868 and the publication of the book ‘Cueva called de Atapuerca’, the first scientific publication on the sierra that has been 150 years old.

This complex arises from the collaboration between the Atapuerca Foundation, the Caja Burgos Foundation and Caixabank. A project that yesterday its main leaders, Rafael Barbero and Mark Benhamou, were able to enjoy with the guidance of those responsible in addition to the co-directors Eudald Carbonell and José María Bermúdez de Castro. A visit that ended in front of the great 400-year-old quejigo who in Mauricio Antón’s recreation gave shade to Miguelón and his tribe and yesterday to those who have made it possible for visitors to travel these paths of the past freely and for free. Although those who want to know a little more about this environment will be able to participate in guided tours on alternate Saturdays (first and third Atapuerca Natural and second and fourth Atapuerca Espeleo) from 11.30 am. Both visits have a duration of 2.30 minutes and a cost of 12 and 18 euros respectively.